With only one match left in league play, the Chico Men’s Rugby team remains undefeated with a 5-0 record. They have been out scoring opponents 286-48. That puts them in a three-way tie for first in the Pacific North DIII, with Redwood City, who they have already won a match against and Colusa, which is in the Southern league. 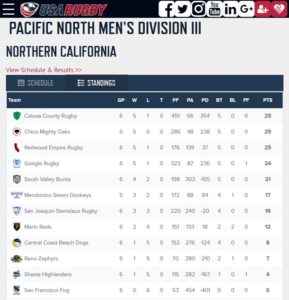 league match to go, team President, Timothy “Cheese” Bushard recognizes the hard work that has gone into making it this far,

This season has been one of the most difficult but one of the most exciting season that I’ve been apart of with the Mighty Oaks…the level of commitment that is needed to accomplish the team goals of making playoffs and trying to make a deep run is difficult.

One of the reason behind the success this year has been attributed to the level of teamwork camaraderie that has developed between the players “…the team has really found success in bonding together and putting the Mighty Oaks above their person goals” said Cheese.

Reno at Home for the Final League Match

This Saturday, April 1st, the Chico Men’s Rugby Club will host the Reno Zephyr’s for their final match of league play. The last time the two clubs faced off the Mighty Oaks bested the Zephyr’s 49-12. With playoffs on the line the Chico Men’s Club know they will have to come to play to earn the victory.

The final match will be play this Saturday April 1st, 3:00pm at Pleasant Valley High School