This Saturday, 2:00pm at Treasure Island in San Francisco, the Chico Men’s Rugby Club (8-0) and Colusa Rugby Club (9-0) will face off in the Northern California Rugby Football Union DIII Championship. The winner will advance on to the regional round of USA Rugby National Playoffs, they will also maintain bragging rights for a rivalry that has been around since the early 90’s. 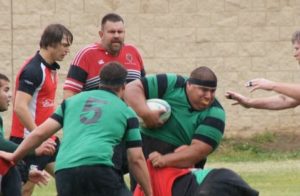 The rivalry started in 92 when a handful of Chico Men’s Club players defected to the newly revitalized Colusa Rugby Club. That year both teams faced off in the NorCal Championship match with Chico ending up on top. Since then the two clubs have battled it out year after year each taking their fair share of wins and losses.

Recently Colusa has been a force to be reckoned consistently making appearances in the national tournament and last year being the runner up. Chico, on the other hand has been battling it out in the DII league for the last couple years until their recent move back to DIII. Even though it’s been over a decade since they have had a league match against each, they have played each other consistently during preseason tournaments, which has helped develop a long lasting friendship.

Now the two undefeated teams are on a collision course for this Saturday. Colusa got the better of Chico during the preseason with a sound victory 48-17. Despite the loss coach John Fox feels confident about the match at Treasure Island “This should be a great match and I feel we have every opportunity to come out on top if we play our game and show the heart and composure we did in the Google match.”